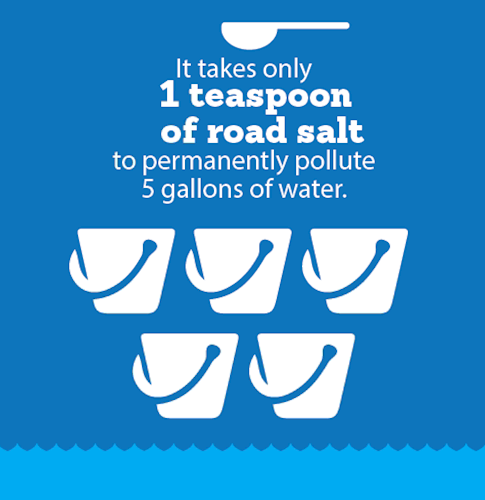 Once salt is in the environment it doesn’t go away. It ends up in our lakes, rivers, streams and wetlands. Chloride from salt degrades freshwater ecosystems. It only takes 1 teaspoon of salt to pollute 5 gallons of water to a level that is toxic to native aquatic organisms (395 mg/L). Naturally occurring concentrations of chloride are >1 mg/L throughout most of Wisconsin, but our surface water, groundwater and soil have been absorbing virtually all of the salt spread in the state for more than six decades.

The widespread use of salt has lead to the steady salinization of surface water and groundwater, threatening freshwater resources and our drinking water. 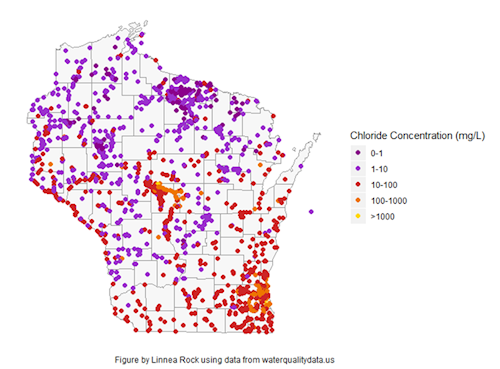 Removing salt from water is cost-prohibitive

Once salt gets into water it is very difficult to remove. Treatment, like reverse osmosis or ion exchange, is costly to install and even more expensive to operate. It could cost millions or even billions of dollars, so preventing salt from entering our drinking water resources in the first place is the most cost-effective solution. 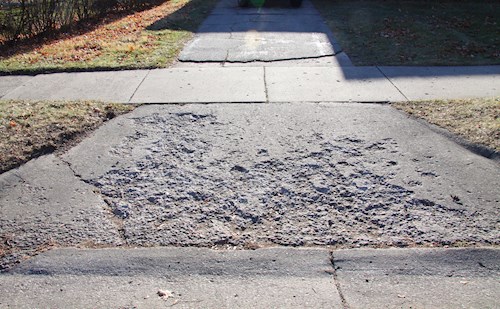 Salt weakens the concrete, brick and stone that make up our homes, garages, bridges, and roads. One ton of rock salt causes between $800 and $3,300 of damage to buildings, bridges and other infrastructure (source). Nationwide we spend over $5 billion annually  to repair salt damage to roads and bridges and we're not keeping up (source).

Road and sidewalk salt can irritate your pets' toes, feet, and skin. Problems can also arise if a dog eats salt or licks their paws after a walk. Excess salt can cause toxicity concerns, throw off their electrolyte balance, or cause hypertension, cardiac arrhythmias, vomiting, increased urination, increased thirst, muscle tremors, or seizures. You can keep your pets healthy by shoveling first, and applying only the right amount of salt to keep sidewalks safe.

Salt can stress plants and animals that have adapted to freshwater environments. Before reaching lethal levels, chloride (the negative ion in sodium chloride - NaCl), has a variety of direct and indirect impacts on the health of organisms in aquatic ecosystems. 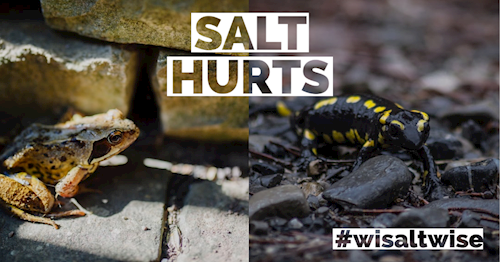 Spotted salamanders and wood frogs are two amphibians that are rarely found once pond chloride concentrations exceed 200 mg/L. Increased salt concentrations make wood frogs more susceptible to parasites.
The embryonic survival of spotted salamanders decreases by 32% at 145 milligrams of chloride per liter and 97% at 945 milligrams per liter. This is equivalent to three teaspoons of salt in five gallons of water. 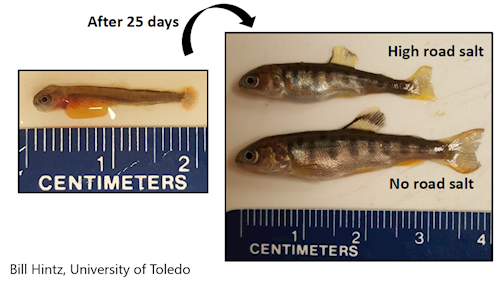 Scientists hypothesize that the young of many species are impacted before the adults because the organs that help with osmoregulation (kidneys, gills, etc.), the regulation of salts in the body, are not yet fully-formed.
Rainbow trout in high, but environmentally-relevant, salt concentrations (3,000mg/L) experienced a decreased rate of growth (length and mass) after 25 days as measured by Bill Hintz, University of Toledo.